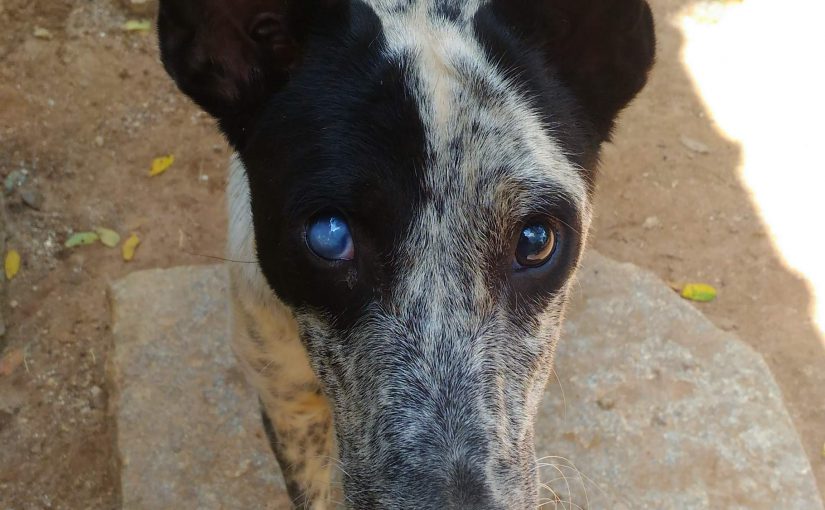 For those who don’t know me, I adopted Max nearly two years back when he was 11.5 years old. He has since grown to become the very center of my life and love. Max is not the only old person in my life. My grandparents (only my grandmother is still alive) have been a big influence on me. To everyone who continues to ask why I adopted an old dog, I say, “for the same reason we keep our grandparents around. Because you don’t just throw people out because they are old”. I always assumed that my logic was simple and straightforward. But then I visited CUPA’s Geriatric Centre.

One Saturday morning after breakfast, three of us decided to daytrip down the highway to meet some senior pooches. I had heard about CUPA’s Geriatric Centre from Chintana Gopinath’s Instagram post. Located in Mylappanahalli, 12 kms off the airport road, away from Yelahanka, the centre is an unassuming plot of land with a line of tin sheds hugging the perimeter. There, toddling around the trees live 42 old and abandoned pooches. As you park outside the main gate, you can hear the excitement in their barks. Enter the main gate to the compound and the search party has its front paws on the second gate and fence, figuring you out.

“Oh yes, these are heavy petters!”, they declare.

Indies or pedigrees, these old timers haven’t heard about your personal space. Some jump up to greet me. Others are rubbing up against my legs. A third group can sniff Max on me. But they know you are here to pet them and they intend to make the most of it.

“Team, bring out your best puppy faces and get ready to tailwag. Easy targets approaching!” Ammu the socialite announced.

I visited #CUPA Geriatric Care centre for #seniordogs in Yelahanka today with @divmu and @thejeshgn Thanks @chinthanagopinath for talking about this #wonderful place recently. They house 42 old and abandoned dogs. We took some biscuits and supplies. The biscuits disappeared in no time. They let me scratch their ears andtickle their bums till siesta time! Do take some time out to meet these #adorable #dogs and make them feel loved. They could use supplies of petderm shampoo and petjoint tablets. #dogsofinstagram #mademyday #bangaloreweekend #daytrip #seniordogadoption #opttoadopt #adoptdontshop #dogstagram

The three of us on the visit carried biscuits and medicines. Needless to say, the biscuits were inhaled. They disappeared without a trace! I tried to save some for the laggards but without a lot of success.

“Enough with the formalities. Sign the books, let’s get on with the main event already”, Lalitha, the matronly Labrador egged us on matter-of-factly.

Dot, the most daring of them came up and asked to be petted. Seeing how willing we were, the others joined in. Soon demands were being heard.

“You have two hands! Why don’t you pet two of us at once?” That was Shadow.

“Ufff…why do you keep tickling my ears? Here, pet my back… Ok now, rub my chest.” Scare was getting his money’s worth.

An hour and a half later, when my hands began to hurt, one by one, they went out to the yard and found themselves spots to lay down and take in the warm sunlight of the damp June afternoon. In no time, they were fast asleep, dead to this world.

Then there was Benji. Some sort of furry terrier, Benji had a nasty temper. Chikkalingaiah the manager, had warned us to stay away from him. Just like Maxubee and Ammuma, he was unfriendly. Both of them liked to be left alone and let me hug them because, well, they didn’t have a choice! Benji was just like that. He lay on the bench with such ease that I assumed it was his spot. Earlier, while the others crowded around asking to be petted, he had disdain written all over his face. Once the eager lines fell away, I couldn’t resist babytalking Benji.

“Whoosh my good boy? With dat grumpy face? Whoose that furball Benji? Is that you? Are you my Benjiboo?”

This fellow is Benji. While most of the other ones were eager to be petted, this one was #frumpy; just like my #maxmaxmaximax Obviously, I was drawn to him. I wanted to #pet him so badly that I sat next to him on the bench and baby talked him for a while. When I finally touched him, he gave me the dirtiest look. So my #goal for upcoming visits is to become a Benji bumchum just like I became a #maxminion #seniordogs #adoptdontshop #fortheloveofdogs #dogfriend #CUPA #cupageriatriccentre #rescueddog #specialpreference #furball

He ignored me. My companions warned me not to touch him. But Benji stole my heart. So I touched him. And he snarled at me. Maybe next time.

The place is run by Chikkalingaiah and his two aides. Their love for the dogs is not physical. There isn’t a lot of touching or babytalk. But you ask him any of his dogs’ names and he will stare at them for 20 seconds before responding, Scare, Shadow, Dot, Blindy, Ammu, Latha, Lalitha. The facilities here are basic. They are fed everyday. A doctor visits twice a week. But they could use more food, treats, petderm shampoo, furglow, neurobion etc.

I block out what their lives would have been like if this shelter didn’t exist. But I think of the people who abandoned these lovebugs just because of their age. Or their parents. They will turn old too. Everyone must. How can people not see that?

These are depressing thoughts. What can I do to make people think differently about our old four-legged friends? I don’t know.  But I know what I am going to do. I am going to go back there till Benji loves me!